With our Masters of Booze (MoB) certification successfully concluded, I'd like to share some pictures with you.

A whole afternoon in our education has been devoted to cooking with fine Austrian spirits (yes, that's right, I like the term booze more ;) ).

A restaurant chef made all the preparations in the educational kitchen at the institute of agriculture for us to participate. With regional and traditional Austrian cuisine locally produced fruit brandies by our fellow MoB comrades came along extraordinary well.

Astonishingly the spirits most often were not added to the dishes during cooking, but instead our chef used them like perfume, filled into spray flacons and put as fine mist over the finished dishes. This was absolutely stunning, and gave the food a completely different flavor profile. Sometimes with unusual combinations, like pear on fish or apple on game, but really something to try at home for a special meal or dinner with guests.

Of course we had to taste every brandy in advance to find out, if it was even suitable for cooking, which made it a really chummy afternoon. But have a look for yourself. 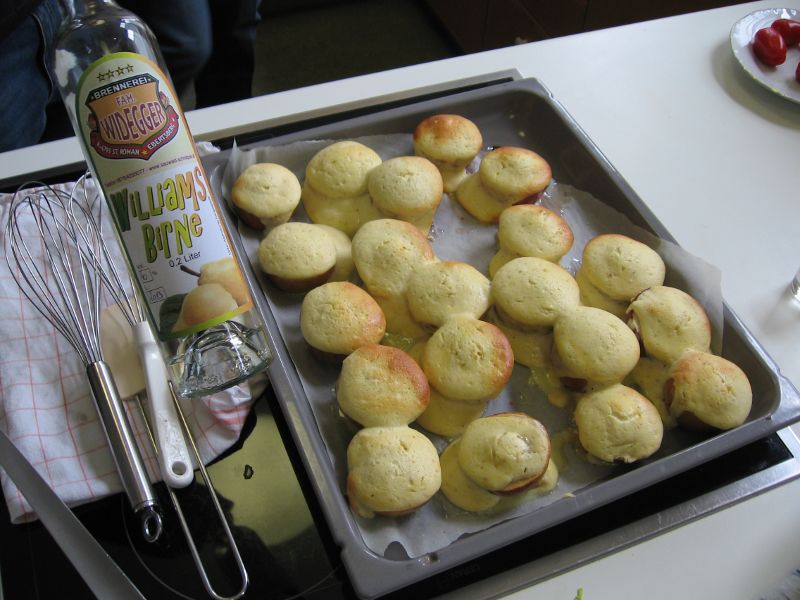 That Pear Brandy is one of our personal favorites. Made by Family Widegger Distillery with love, a really clean spirit with a very distinct Williams in which you can smell and taste all the goodness of a perfectly ripe pear. Each gulp cries out for more! And yes, the curd apple was just heavenly as well. :) 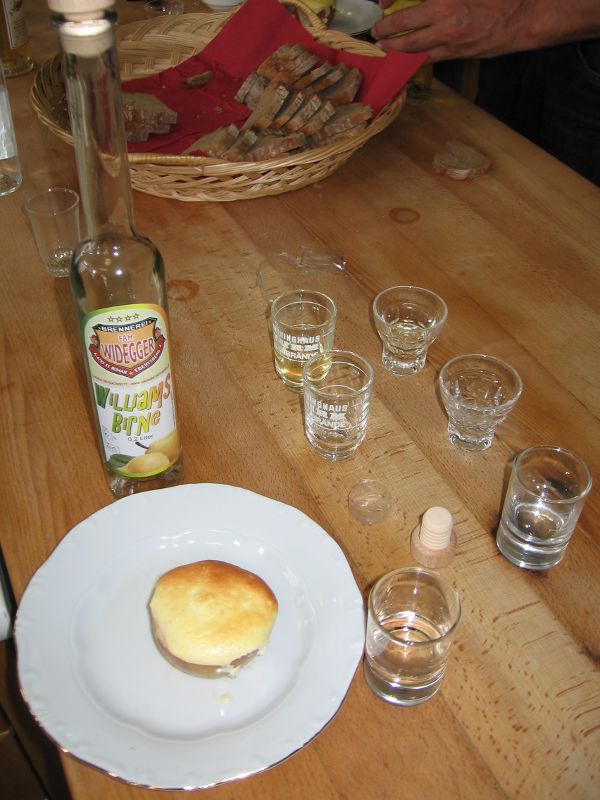 Oh, yes, it was a very small bottle and hard to keep something left for the actual cooking. 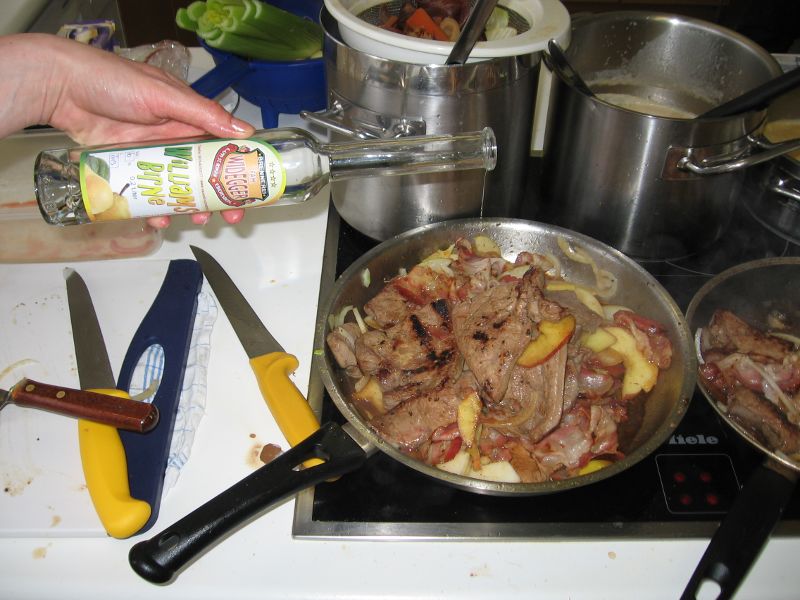 A really great addition and wise selection, that mix of flavors went very well hand in hand. Alcohol is a mighty flavor enhancer, so it's important to just use the right amount to not make it ostensible. 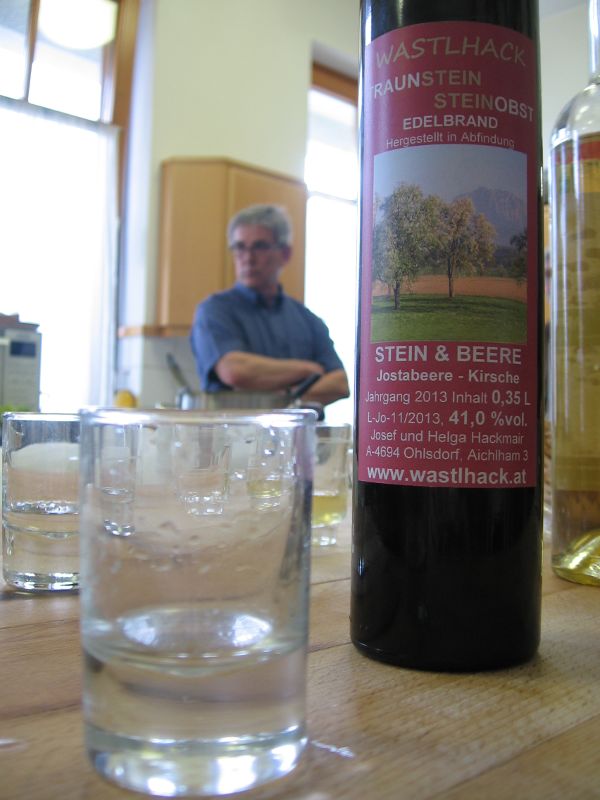 That fantastic Jostaberry-Cherry Brandy was too precious to be put on meals, we had to taste it in between on its own. In the background you can see the master distiller who made that dream come true, Mr. Josef Hackmair from Wastlhack Stone & Berry Distillery. 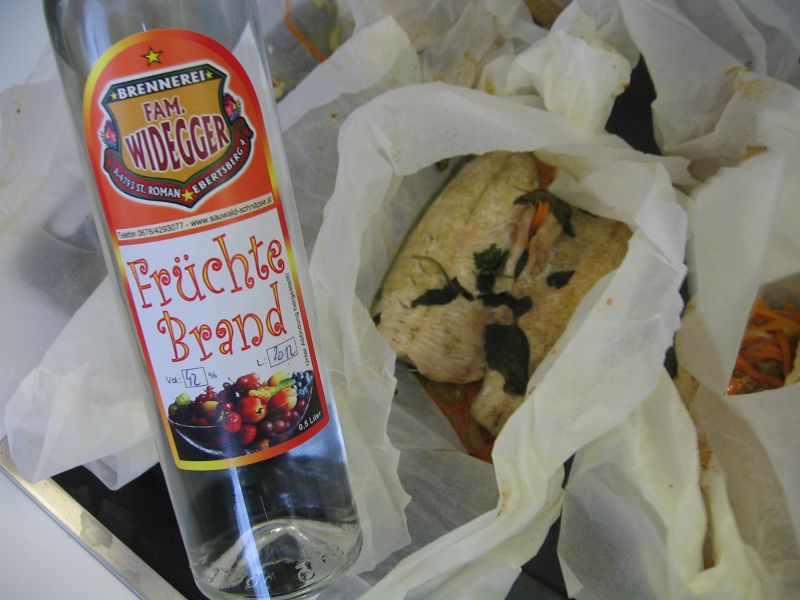 Family Widegger Distillery has a lot to offer, like this spectacular Mixed Fruit Brandy causing a true fruit explosion in your mouth, which made the fish a really exciting experience. 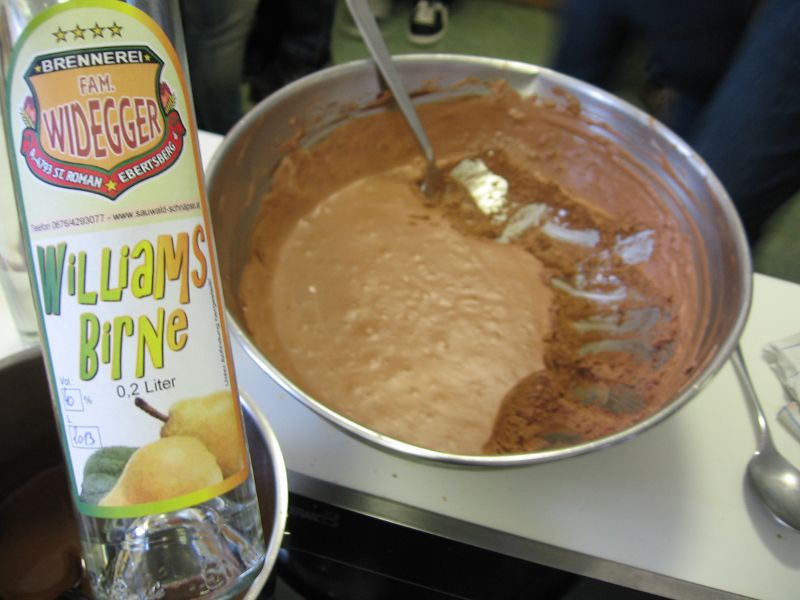 Did I mention that we all really liked the Williams Pear? Looks like it goes very well with about everything. Some may think to first take a sip of brandy, then a spoon of chocolate mousse, mix it well in your mouth before you swallow, and yes, that's just as great as spraying a slight haze of Williams Pear over the mousse.

As said for our MoB education, we all had a blast and not just for the consumed alcohol. ;)

StillDragon Europe - Your StillDragon® Distributor for Europe & the surrounding area