So here is the coolant plumbing design we've settled on for the big dragon, this is what we'll implement when we plumb her up in the next two weeks or so. Finally got the construction permits finalized, so now we're going to rock and roll. Here is what we've got: 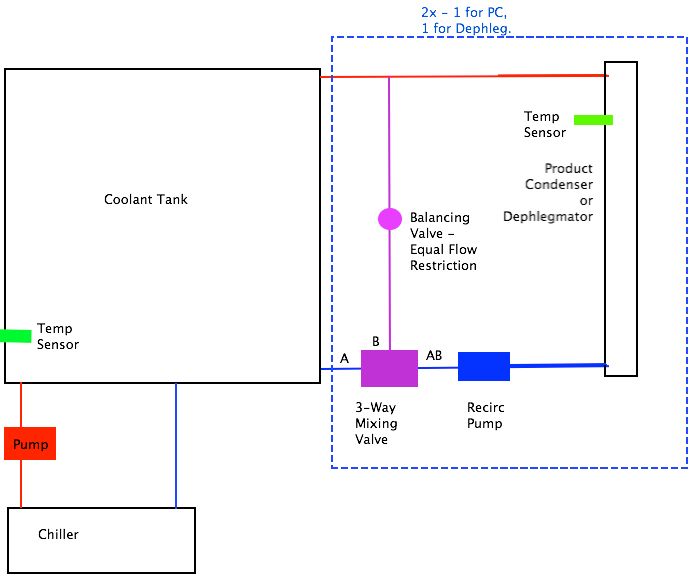 What I wanted to run by the crew here is the plumbing design for the condensers. This is not a typical plumbing design that you see here, but it's one that we think may have some benefits. This is a constant flow rate setup, it's very common in process plumbing. No matter what the set point, the flow rate through the condensers will be the same, and will likely be very high compared to designs that slow the flow rate at set point.

My theory is that this design will essentially eliminate the temperature gradient in the condensers, or at least significantly reduce it. Being able to push a higher flow rate, without cooling lower than the set point, will make the condensers perform more efficiently (you can keep a larger percentage of the condenser surface area cooler, greater overall delta t). The other benefit here is that for the RC, you lower the risk of sub cooling the distillate, since the input coolant temperature will be warmer than the reservoir temperature (unless of course you are hitting the limits of the design).

Both the PC and the RC will have the same plumbing design, but they will be completely independent, and each will have their own pump, mixing valve, and controller.

The chiller will also have it's own pump and controller, separate from the still condenser controllers, to pre-cool the tank prior to a run, and to try to keep the coolant temp stable through the run.

We're going to try to get by with a coolant tank of 500 gallons, since we've got one. I have a line on a monster tank, 2000 gallons, that's free, but the thing is just too damn big.

Chiller is 3hp, we think it should be sufficient.

We may add a liquid-to-air heat exchanger on the return lines to the coolant reservoir. This would be more useful in the winter than the summer, but we should be able to bleed off a some heat prior to returning the coolant. Might consider just putting it on the roof, and just not needing to run the chiller for 5 months out of the year.

Thoughts? Comments? I did a small trial run of the condenser plumbing design, and it did work just fine. I ran it on a PC and swore I could push it harder than usual, but I generally don't record coolant temps, so I have no idea if it was just because of a lower coolant temp.