Did this a couple years ago, but had some interest from those contemplating new builds.

I think this is one of the best freestanding solutions around that get away from the problems associated with the two major designs, either with a wooden collar and taps poking out the front, or with a font mounted on top of the lid for the freezer.

The taps on front are liable to bumping or kids and drunks leaving them on. They are too low for comfortable pouring and leave you with lots of problems trying to mount a drip tray. All these problems are surmountable, but all require a compromise.

The font on top has the problem of either drilling a hole under the drip tray to accept spillage inside the fridge in a bucket or bottle (hence taking up room) or trying to remember each time you open the top to empty the tray. Pain in the arse around my place where soft drinks and bottled beer are also kept in the fridge.

It also means that you need to install a castor system in order to wheel the fridge out from the wall to access it for kegs. Real pain on carpet.

My solution was still to install a collar, but to screw a cheap small cupboard from the cheapo furniture shop to the side of the collar and mount the font and tray on the cupboard. Inside the cupboard (after cutting a large hole in the bottom) i have room for a 10kg Co2 bottle, dual regulator system, and all my electrics as well as the controller and spare tap handles etc. 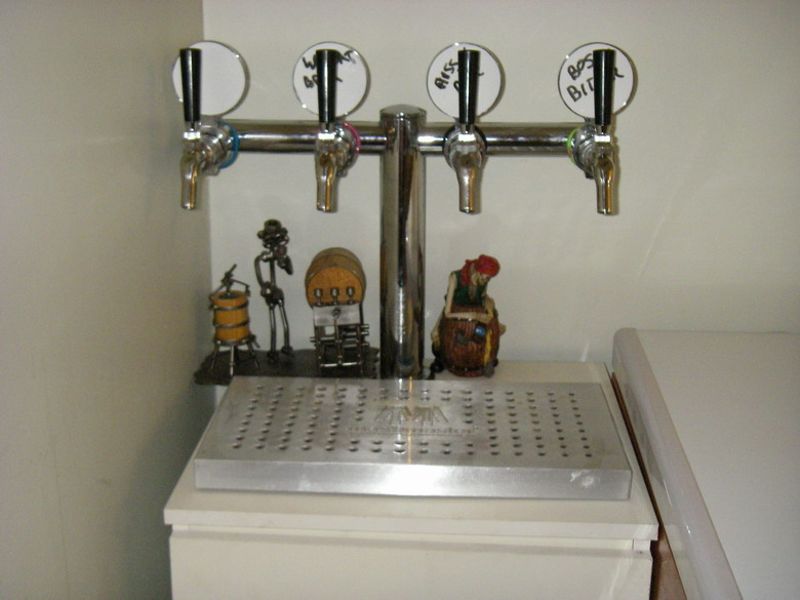 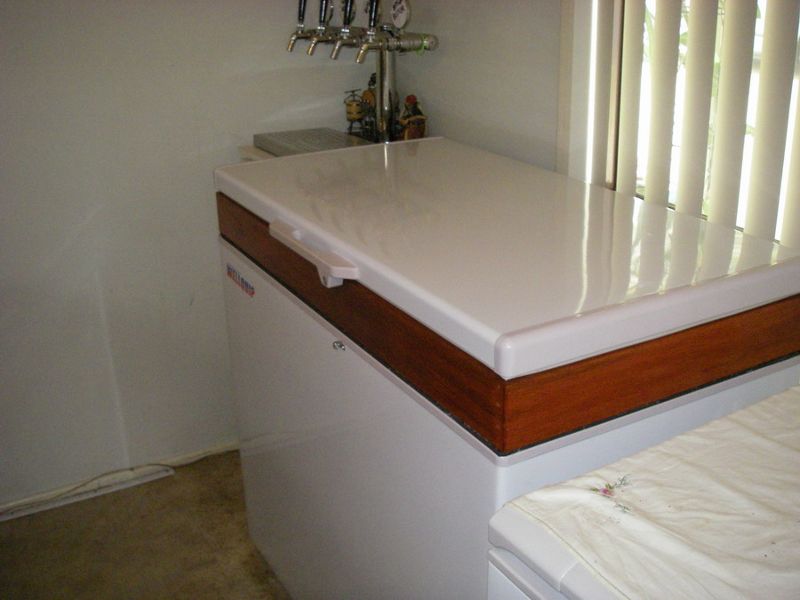 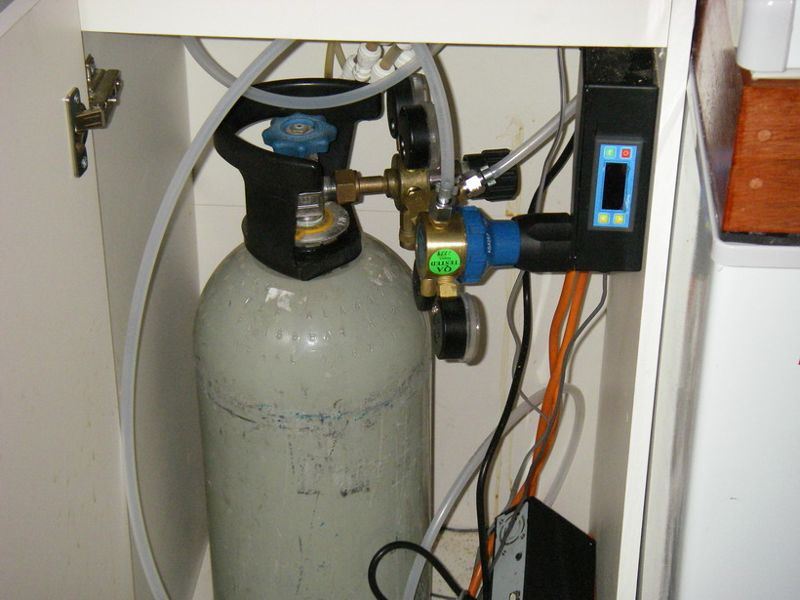 I bought the freezer new from ebay (i think it was 230l or so) and had a chippy mate do the collar. Unscrewed the lid and screwed it back to the collar after siliconing it to the fridge. I used some soft seal to go round the top of the collar.

The kegerator takes 6 kegs with room on the hump for all my guy stuff like containers of yeast, mushroom mycelium, sausage skins, enzymes and all that other stuff she won't let you store in the kitchen fridge.

I installed a gas manifold with check valve to stop any liquid getting back to the regulators, six gas lines and five beer lines (one goes through the wall behind the kegerator to the outdoor beertap in the entertainment area). All go through a large hole into the cupboard and then up to the font or to the gas bottle (cept the back one).

The downside of this design is that there is a short run (less than 400mm) from the inside of the fridge to the font. I have this insulated (the font is floodable but i haven't bothered flooding it) so in the summer you get half a glass of warmer beer for your first pour of the session. This doesn't bother me so i haven't fixed it. After the first pour it's all good.

There's a small computer fan in there to circulate the cold air, but it doesn't do much because of the way i have it mounted. i have been too lazy to change it because the fridge is colder at the bottom (which is where the kegs draw from) and i don't drink soft drink :)) 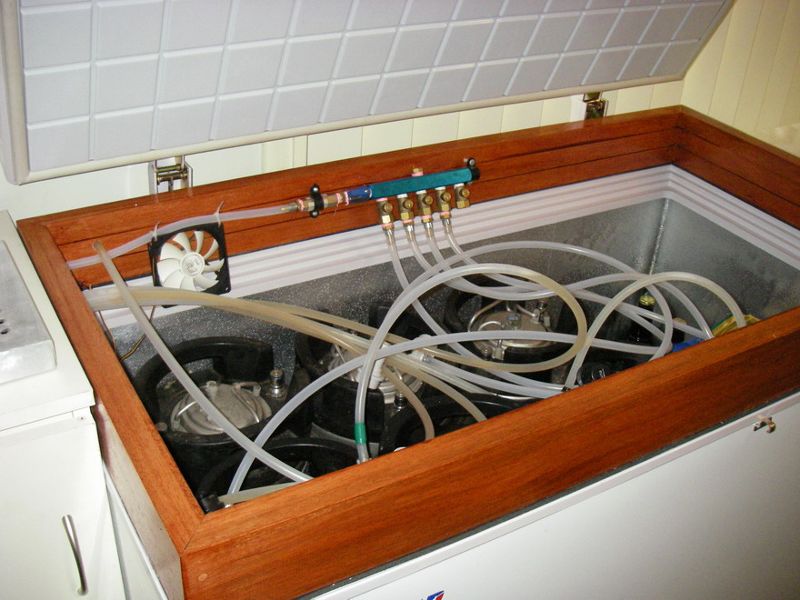 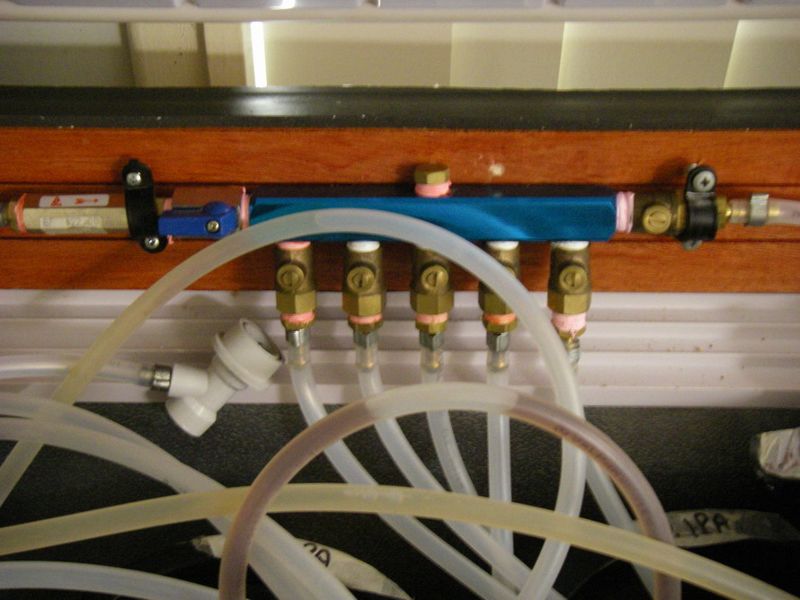 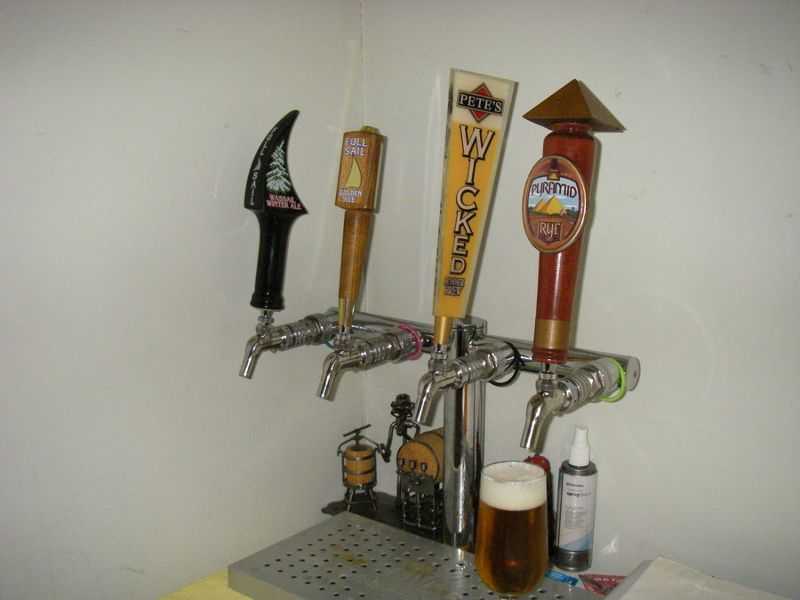 When i bought this model i chose it because of capacity, price, and finally because it had an STC type controller built into the freezer. I borrowed a usb data logger from a fridgie mate and ran it for a week on the fridges own system and then fashioned a thermowell from a closed piece of copper siliconed into the lid of a sports drink bottle full of water and put the STC temp probe in there and logged it on the external controller for a week.

The difference was chalk and cheese. The temp probe belonging to the fridge is obviously stuck to the outside of the liner and would cut the fridge on and off regularly with wild temp swings.

The STC with dampened probe would allow the fridge to come on much less often for slightly longer times and the temp stayed within a couple of degrees.