So I have received the DIY Controller kit, and have assembled it as per the discussion DIY Power Controller and the Econobox Build Instructions (PDF).

I have used 10/3 cord with RV ends. It is wired for 240v with the power coming in from the left side cable and leaving to the element through the right side cable.

The white 10 gauge wire is 120v, as is the black 10n gauge wire. The black wires are connected to the SSR number 1 and 2 terminals. The 10 gauge wires green are ground. 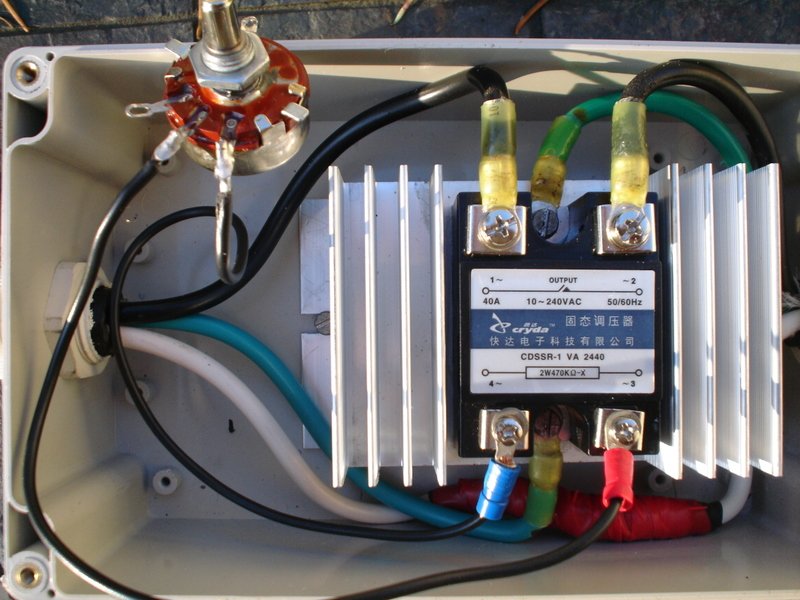 Now the problem.......
The controller does not seem to control the amperage, or heat of the 5500w element. No matter which way I turn the knob, full counter clockwise or full clockwise, the element seems to be full power on. There certainly isn't any "off" or "no heat" position to the knob / controller, and no "simmer" setting that I can detect. The 5 gallons of water in the 58l keg heats up fast to boiling at any setting.

I have just built the 2" boka still and I was doing the vinegar / water cleaning run. There was no way to tame the heat of the element and reduce the rapid boiling going on in the keg, except for unplugging the power from the wall.........then the boiling stopped immediately, as in right now! That is also how I know it is not even close to being able simmer the 5 gallons of water in the keg the way it is now. I can't imagine trying to do my first stripping run with 5500w full tilt at this point let alone refluxing.

Since I have taken the pics, I have added a ground wire to the pot ground terminal and grounded the pot to the SSR ground terminal thinking that may make a difference. I tried to do a cleaning run with straight water with the same result.......rapid boiling that the controller would not tame. The condenser cooling water flow was almost at 100 percent volume to condense the boiling vapor, and the heated water was coming out at 85 deg C.

I am at a loss to know what is wrong here? I have never assembled / used a SSR controller before (I am not new to home electronics projects), so hopefully there is something obviously wrong / missed to you guys that I am over looking. All connections are tight.

Thanks for your thoughts.