This issue has occurred in multiple batches in various recipes. I am using a stainless steel 8 gallon milk jug boiler, 2” OD sanitary SS column, 30 inches of copper mesh packing, in a vapor management still configuration with electric heating element. This configuration will consistently generate crystal clear spirits at 96% ABV. However, when I dilute the ethanol to 40% ABV with distilled water it becomes cloudy at around 50% ABV.

The last time I was making vodka I was going to see friends the next day and wanted to bring them a bottle. I calculated the DI water to ethanol coming off the still, added the correct amount of water, and allow the distillate to drip in to the bottle straight from the parrot. This bottle came out clear vodka at 40% ABV. This sample was taken from the middle of the run (jar 10 of 21). Later I went to dilute the other jars and they were cloudy.

Attempting to unravel this mystery, I simulated the bottle I produced mid run. I added the correct amount of water to the bottle, placed the ethanol in a plastic bag, poked a hole in the bag, and slowly dripped the ethanol in to the water, as the parrot had done. I was so excited when all the ethanol had been added to the bottle and it was clear, I grabbed the bottle off the counter to show my wife. Upon jerking it off the counter in my excitement and swinging it around to show her the attached picture was the result. The ethanol being less dense had formed a layer on top of the water and when the interface mixed… alas still cloudy. It stayed that way for many days, finally I shook it up and it was still cloudy.

Can someone explain what is happening here and how it is clear vodka is produce? Only the hardest core alcoholics in my life will consider drinking this vodka, which I have attempted to market as “partly cloudy” or “greyer goose” both of which are clearly not going to make it. Its flavor is good, ingredients are pure, but its presentation is unacceptable, as vodka is clear. 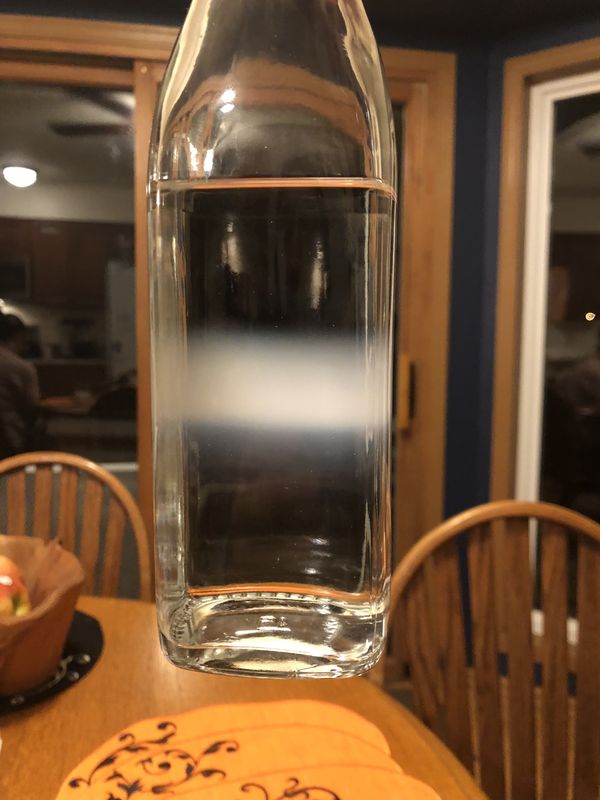