During a workshop at Batch206 in Seattle, WA, the distiller stated that they only use a trickle of water for their 1000L Kothe vodka still. Being a bit of a skeptic, and having many years of brewing experience of cooling wort, I wanted to know if this was indeed true, and if so, how they did it..

I noticed the capillary tube going into the top of the very large condenser that went to a valve at the bottom of the condenser. The condenser was described as a bunch of tubes in the shell, what later learned was called a shotgun condenser. I snapped some photos and started thinking...

Doing some research when I got home, I learned that this was a Danfoss 'AVTA' thermostatic valve. I then saw the same AVTA type of valve used on a small ~100L Carl still and also on a small Holstein still of about the same size... obviously if this was the only valve I had seen on new stills, there had to be something to it.

I learned that there are several options on these valves, the main options I felt that I needed to look at were port size, charge type, and temperature range.

Charge types are Adsorption, Mass, and universal, with Universal having to have the capillary bulb placed between horizontal and upright to keep the liquid in the bulb.

Temperature range depended if I was putting the valve in the distillate or the cooling water.. placing it in the distillate meant 60-90F (~15-32C) FL has warm ground water, so the possibility of 90F distillate is very real. The commercial manufacturers did not place the sensor in the distillate, and I think it is because it would be too slow to react. Placing the sensor in the cooling water meant that for efficiency, the hotter the discharge water the better, the upper end of the range would have to be lower than the vapor temp of alcohol, and the lower range not too much warmer than the supply water. 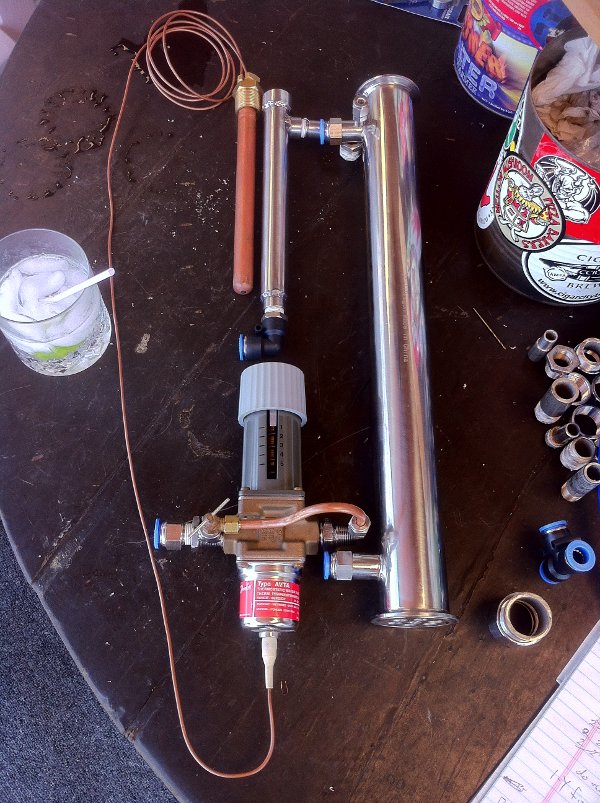