So these new filter disks have got me thinking. Using existing components I could now make a Hopback or Randal... :)>- 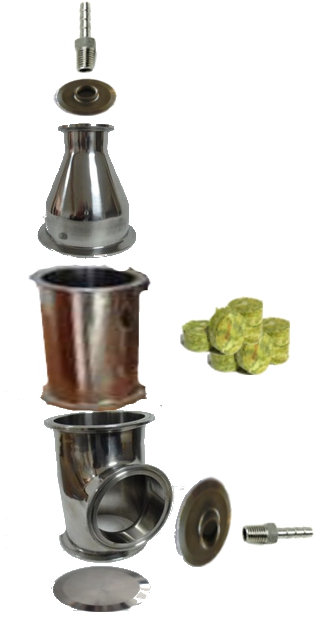 Wort flow enters from bottom and exits at the top (to bleed out oxygen).

I have a HopRocket and it won't fit enough hops in it (only 100 odd grams ~X( ) so I got to thinking about a bigger one and the filter plates... I would probably go the 305mm extension. I have not priced the configuration but expect it would be expensive if you were to buy the bits to build one. However, if one already had the parts and just needed a couple of the filter disks...

Another option would be to make an inline Hopback with existing components (most of which I already have):

One could use the standoffs/mounting brackets from the RIMS kits.

I think it would be unwise to use the filter disk hard up against the rims cap, this is why I have used tapered reducers. It has also got me thinking about how small changes to components (i.e not yet existing) could enhance these and help construct things such as inline trub filters. For example with the Randal/Hopback, a 4" short pipe extension (instead of the bubble tee) with a 1/2" socket welded to it would do away with one clamp, gasket and RIMS cap in the bottom section of the top picture. One could go for a 3/4" ferrule welded on instead of the socket and then a clamp another ferrule but this would only suit 1/2" brewery hose and could not fit John Guest fittings to accept beer line. The 1/2" socket would be more versatile.

Sorry for ripping the images and butchering them. :-SS I thought it would be OK in the context of this discussion.

If it aint half off, it aint on sale!